Didn’t we all hate middle school? 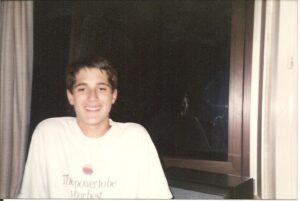 I mean, I was the dorky kid wearing a computer shirt in 1993. Who did that?

Liam asked me tonight if I had any pictures of me as a kid he could see. I showed him a few I had scanned in, then realized I could just as easily find myself in my old junior high school yearbooks. Flipping through them, I realized I only have two friends from then I still keep in contact with, Boyd and Jenny. (He got a kick out of seeing Jenny since we live pretty close to each other in a weird twist of fate.) I only recognized a handful of other people, most of them just barely by either name or picture. The dearth of signatures in my yearbooks spoke volumes, more of them from teachers than students.

I mostly hated those three years. Dumb tweens, unsure of themselves, being mean to try and feel better about their own shortcomings. I have to shamefully admit that I did some of that myself as some kind of idiotic catharsis for being one of the picked on kids. It was bad enough that I made sure to enroll at a county-wide magnet school, Las Vegas Academy, not because I had any particular interest in the International Studies program, but because I could not handle spending four more years in that kind of environment. Many of my few friends would end up in a different high school anyway, Las Vegas growth fueling ever-shifting school boundaries as new ones opened annually. If I was going to start over, it needed to be a full reset.

All this made me realize why I’m very glad that Liam goes to the school he does. With zoning for schools, you get kids who both want and don’t want to be there. If you happened to be living close to each other, congratulations, you get stuck in the same building for six hours a day, five days a week, 240-something days a year. At Las Vegas Academy, everyone wanted to be there. Heck, many of the performing arts kids would be there 18 hours a day for weeks on end during shows, napping in the hallways before classes and during lunch. It was also a collection of the other “weird” kids, ones who didn’t quite fit in anywhere else. I may not have known it at the time, but I’m sure in hindsight that many of them did what I did, flee zoned schools with people they couldn’t stand. And most of us were lucky enough to have parents that supported us.

That’s what Liam’s school experience is like. The charter school has more demand than seats. It ends up attracting kids whose parents are really invested. The kids themselves really want to be there. I don’t hear stories about kids being mean, just kids who are kind and decent. And I’m glad he has what I didn’t.